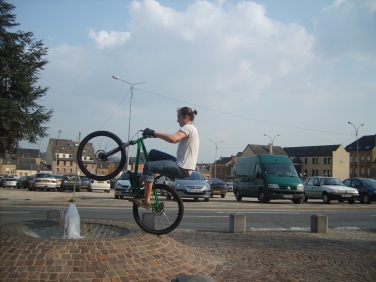 Copy this HTML to put this video on your site, blog or MySpace

Mtb from Fourty2TV 20 November 2013
Game Of Bike - Race Edition
735 Views
Mtb from Quentin Chomier 26 November 2011
water jump
715 Views
Mtb from fan2trial 31 January 2012
Like A Family 2, is the 2nd vidéo about the RTF 26 Trial Club at St Pantaléon Les Vignes (South of France) Filmed & Edited : Olivier Riou / fan2trial. Music & Others informations are at the end of the video. http://rtf26.blogspot.com http://fan2trial.blogspot.com
LIKE A FAMILY 2 / RTF 26 Vélo Trial Club
416 Views
Mtb from la_tole 6 May 2014
MTB TRIALS - Maxime TOLU was added to the Crewkerz team back in march but it's about time that he get an official welcome edit. Stay tuned for the full video edit, coming in june. Bike: Crewkerz freed II. Location: Massif du Sidobre. Filmed by maxime TOLU with assistance of Guilhem St PAUL and Aymeric St PAUL. Produced and edited by maxime TOLU.
MAXIME TOLU : WELCOME BACK TO CREWKERZ [ TEASER ]
281 Views