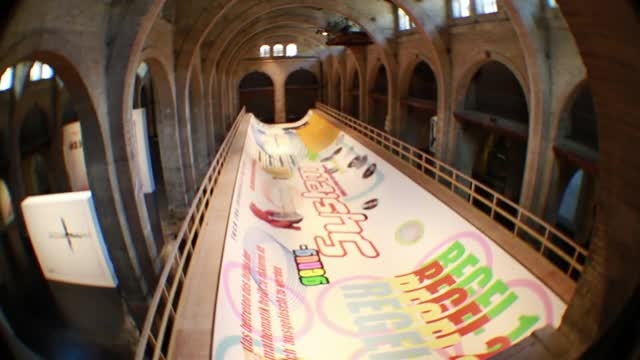 Latest
"Session at the Museum" presented by Electric
On Monday 4th of June, the Contemporary Art Museum of Bordeaux, as well called CAPC, opens its doors for a private session to a part of the Electric French skate team supervised by the Photographer David Manaud. The young Vincent Matheron from Marseille, Julien Béchet and the local hero Benjamin Chadourne could express themselves on the huge masterpiece made by the Artist Michel Majerus from Luxembourg, who has past out by now. As a big Fan of Skateboard, the artist decided to made one of its piece alive allowing skaters to ride it. The CAPC is an uncommon place by its hight, it gives to...
7 646 Views | 34

Other by Electric..Visual 16 May 2012
Down & dirty, in the deepest south, where gators lurk with bones in their mouth, two southern bells,a super charged creature, raising hell in this mini feature. Light up a burner and hold on fast as Electric presents: "Get Something Fast Under your Ass". http://www.electricvisual.com/somethingfast/
Electric Visual "Get Something Fast Under Your Ass"
105 Views
Snowboard by Electric..Visual 30 March 2012
Electric x Nixon proudly present their latest collaboration “Get some Trouble”, a webisode featuring Trevor “Trouble” Andrew on a 3 days journey around the European X Games 2012 in Tignes. Trevor Andrew gained fame as a professional snowboarder and took part in the X Games himself in 2000. Now retired from the contest circuit, he follows his passion for music as a successful skate punk electro artist. This year, Trevor was invited as a guest star for the closing party of the European...
GET SOME TROUBLE Electric x Nixon exclusive webisode
1 514 Views | 1

Snowboard by Electric..Visual 23 March 2012
Electric x Nixon to present their latest collaboration « Get Some Trouble » release date March 29 - 3 Days in Tignes with Trevor " Trouble" Andrew Trevor Andrew, world famous ex pro snowboarder and skate punk electro musician from New York was invited to the European X Games as a guest star for the closing party. Electric and Nixon took the opportunity to follow Trevor on a journey around Tignes with the « Trouble Gang » showing his one of a kind personality and creative mind. The webisode...
Get Some Trouble / Teaser
82 Views
Surfing by Electric..Visual 24 August 2011
Lighten up a little with Electrics thrid installment of Something for your Eye. A more lighthearted, face-paced look at the zipper side of Indonisias outer islands. Ry Craike's retentless fin wafts, Craig Andreson's timeless style and Jay Davie's Hulk-like power combined into 3 minute ride for your eyes and ears. You Heard !
Electric Surf Video " SOMETHING FOR YOU EYE " Part 3
395 Views
Surfing by Electric..Visual 16 August 2011
“SOMETHING FOR YOUR EYE” PART II. Still your pounding heart, steady your busy hands and force upon yourself this opportunity to free your office-numbed mind. Let your bandy legs run from the four white walls and enjoy the wanderings of Electric’s Craig Anderson, Jay Davies and Ry Craike as they guide their sleds through, over, and under some of Indonesia’s multi-colored carpet rides.
Electric Surf Video " SOMETHING FOR YOU EYE " Part 2
2 056 Views | 12

Surfing by Electric..Visual 2 August 2011
“SOMETHING FOR YOUR EYE” An apocalyptic journey through the dark depths of Indonesia’s wild coast. Blackened barrels, monsoonal storms, seas snakes and serpents. Perch, burn, open your lungs, minds and eyes to the lines of Craig Anderson, Jay Davies and Ry Craike as they drag themselves through some of Sumatra’s deepest, darkest tunnels.
Electric Surf Video " SOMETHING FOR YOU EYE " Part 1
569 Views | 9

Wake by Electric..Visual 10 May 2011
Few Tricks with Electric Leo Labadens
486 Views
Snowboard by Electric..Visual 24 March 2011
Watch the teaser for Cheryl Maas’s film project “Open Air”. Cheryl was followed for six months doing what makes her feel the most driven, motivated, rewarded – filming. Most of the winter was spent traveling around Europe and the US in their two person crew, Cheryl and her filmer John Roderick, allowing Cheryl the freedom to push herself in whatever way she wanted. The results will unfold over five short films, released monthly from September 1st 2011. In the meantime, enjoy a taste of wh...
Cheryl Maas "Open Air" Series Trailer
157 Views
Surfing by Electric..Visual 26 January 2011
The Mutiny represents a simpler way of life--something to appreciate in its own right. In the design process Rasta took the smooth clean lines of the Shotglass and approached it with a jazzy feel choosing a complementary metal eyewire, giving it a classic beatnik style. Relaxed yet aware, Rasta puts it into perspective when he says, "everyone has aspects worth admiring." Show your appreciation with your eyes behind the Mutiny. View The Mutiny on ElectricVisual.com - http://www.electricvisual...
Dave Rastovich - Mutiny Sunglasses - Behind The Scenes
399 Views
Surfing by Electric..Visual 2 December 2010
Behind The Scenes footage on location with Electric surfers Craig Anderson & Ozzie Wright during the creation of the Electric Visual Four Eyed Freaks Sunglass ad for BPM View BPM on ElectricVisual.com - http://www.electricvisual.com/product... View Craig Anderson's Electric Surf Team Profile - http://www.electricvisual.com/team-ri... View Ozzie Wright's Electric Surf Team Profile - http://www.electricvisual.com/team-ri... Check Out more Four Eyed Freaks ads in the Electric Visual Ad Galle...
Craig Anderson & Ozzie Wright - Things That Are Dead - Behind The Scenes
371 Views
Surfing by Electric..Visual 10 November 2010
Behind The Scenes footage on location with surfer Ry Craike during the creation of the Electric Visual Sunglass ad for the OHM III
Ry Craike - Behind The Scenes - OHM III
218 Views
Ski by Electric..Visual 8 October 2010
Short Electric's ski commercial with Romain Grojean. You can check Romain's profile on : http://www.electricvisual.com/team-riders/ski/europe/romain-grojean/ Romain is wearing the EG2.5 in this video. You can check all the characteristic of this goggle on : http://www.electricvisual.com/products/snow-goggles/2010-2011/spherical/eg2-5/
Electric's Ski commercial with Romain Grojean featuring EG2.5
567 Views
Surfing by Electric..Visual 31 August 2010
www.electricvisual.com After more than 3 stops all around France, it was the last and final stop for the Moskito Tour 10 presented by Electric, Vans, FCS, Skullcandy and Monster Energy Drinks. 100 grommets from Capbreton, Hossegor, Anglet, Hendaye, were ready and waiting at 9am sharp at the plage ‘ Les Culs Nus ’. Waves, gentle breeze, beautiful weather and an amazing atmosphere were the main charasteristics of thIs leg ! DAY 1 : A great first day for this leg with nice waves, amazing com...
Moskito Tour / Hossegor / 28-29 August 2010 / Franc
2 191 Views | 2

Other by Electric..Visual 2 August 2010
www.electricvisual.com July 30th, 2010 / Electric Art Shade Expo / Volcom Store Hossegor, France. Hossegor was treated to a night of culture this past Friday as Electric threw their first of a series of art shows better known as Electric Art Shade Expo What’s the Electric Art Shade Expo? Electric Europe approached 5 French artists and proposed them to design unique pieces from different styles of our sunglasses collection. The night saw everything from photography, sculptures to customiz...
Electric Art Shade Expo Hossegor
246 Views
Other by Electric..Visual 19 July 2010
Electric Rock the Shop in BTZ
215 Views
Surfing by Electric..Visual 12 July 2010
After a first stop on the Mediterranean Coast, the Moskito tour is back on the Atlantic Ocean. The tour presented by Electric, Vans, SkullCandy, FCS and Monster Energy Drink, reached Les Sables d’Olonne for the second stop. 60 kids came early on Saturday morning at Tanchet beach to warm up and get ready for the tournament. The competition started at 10am with 15 minute’s sessions. The waves were 60cm to 1m and kids could show to the judges their best surf. Sun was more than shinning, temp...
Moskito Tour / Les Sables d’Olonne / 10-11 July 10 / France.
1 054 Views
Surfing by Electric..Visual 1 July 2010
Check out the latest Behind The Scenes from the new advertisement campaign featuring Dusty Payne and the OHM III
Behind The Scenes featuring Dusty Payne
141 Views
Snowboard by Electric..Visual 19 April 2010
Saturday April 10th was the big European Final of the Volcom Peanut Butter & Rail Jam in LAAX, Switzerland. With a nice spring weather, all the qualified from the previous events joined in Switzerland to compete and win a ticket for the US big final in Mammoth, USA.
The European PBRJ Championships 2010
156 Views
Other by Electric..Visual 25 March 2010
www.electricvisual.com For the first European Winter X games in Tignes, Electric and Rockstar organized a party with a live performance of the band DECIBELLES supported by Electric. Thanks to Rockstar, Method.TV and the Loob Bar for this party.
Rockstar and Electric Party at the X Games
61 Views