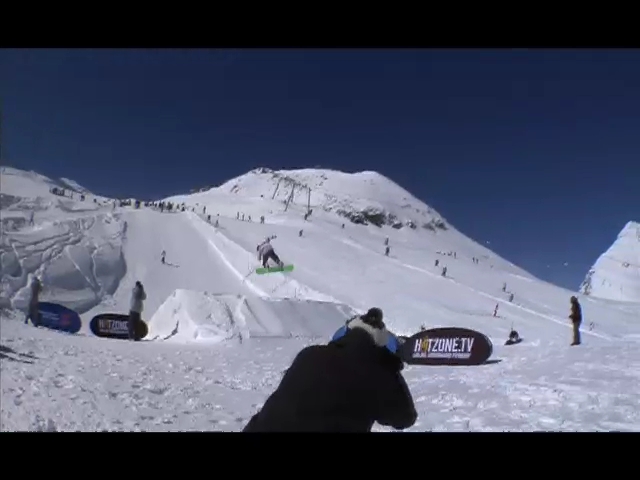 Latest
Hotzone.tv Park Opening Hintertux
Well dude it?s like this? the opening of the park in Hintertux by Hotzone.tv was such a cool event! We were lucky to have good snow conditions, 70cm of fresh snow at the top of the glacier, but only one day of sun. Anyway it was enough for the present riders to stomp sick tricks. Wolle Nyvelt, Marco Feichtner, Friedl Kolar, Marco Grilc and many other were there to hit the kickers. Most of the biggest snowboard brands were also there to let everyone test their new material for free.
1 758 Views | 1

by snowBrOADER 19 November 2007
www.snowbroader.eu - check this 5 minutes video because you will learn a lot about the man: what are his plans for the season and the contests he will attend to, what’s up with his Un..inc board - Gigi reveals stuff about the 08/09 Un..inc! -, what are his plans concerning filming, Alaska and so on. To sum it up: a cool interview ;)
5 minutes with GIGI RUF!!
137 Views
by snowBrOADER 19 November 2007
So regarding the Glacier 3000 - probably one of the best spots to ride in Europe this time of the year - well, the park is fantastic. The classic huge lines of kickers is well groomed and offer possibilities for all levels. A rail line is also there and on the other side of the ski-lift, the fat pipe is shaped as well as the monster gap. Only problem when it’s a bit windy like it was yesterday is the lack of speed to hit all the kickers, but hey, that’s life! snowbroader.eu
GLACIER 3000 - Les diablerets
413 Views | 1